The English name of this beautiful flower is derived from the Greek word for “wind” (Anemous), mainly because the plant grows and blossoms on very high platforms and elevated places, where the air currents can be quite strong. Belonging to the Ranunculaceae family of the Anemone genus, the Anemone Nemorosa is a very resistant plant which can grow even in the harshest of conditions. Names such as wood anemone, windflower, thimbleweed or even smell fox are commonly used to refer to the Anemone Nemorosa, but windflower is the most popular.

What many people don’t know about the wood anemone is that although quite beautiful and pure in appearance, this flower can actually be poisonous. Measuring between 5 to 15 cm in height, this plant’s flowering process starts from the very moment that its leaves appear. The flowers produced by the Anemone Nemorosa or the Windflower can be different in color, according to the place where they grow. If grown in the wild, the flowers are likely to be white, while in other environments they can be pink, blue and even lilac. The Anemone Nemorosa spreads quickly and can actually form large colonies if the soil is good enough for the flower’s development, moist soils are usually preferred. In France, people use the leaves of this flower to create a special vinegar that can be used as main ingredient for mustard. 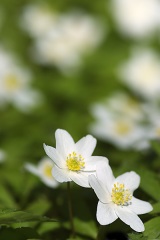 The Anemone Nemorosa doesn’t attract many insects because the flower has no scent and also, it doesn’t produce any nectar. At night the flower closes, while in the power of the sun it expands widely. The life duration of the Anemone Nemorosa is quite limited, as the flower dies in a month or maybe more after flowering. So if you’re planning on picking some of its specimens do it in the early spring, because later its flowers won’t be of any use.

Although highly debated in the past few years for its medical purpose, the Anemone Nemorosa is nowadays recognized as a medicinal plant, but without much information on the preparation techniques or the administrating doses. Some scientists claim that the plant should not be used internally, nor externally because of its acid, poisonous nature, while others claim it helps alleviate toothaches, fever, gout or rheumatism if prepared correctly.

The Anemone Nemorosa is worldwide known as symbol, although symbols differ from country to country. In Egypt people associate this plant with sickness, while the Chinese see it as the “flower of death”. The negative symbolism of this flower continues with the Europeans, who regard this flower as a bad omen, as something forecasting a tragedy. Superstition or not, the Romans used it as a charm against fever.

The Anemone Nemorosa is a beautiful flower which grows mainly in the wild and which is more appreciated for its aesthetic values, rather than for its unproved medicinal purpose.