The Ghost Flower, with a name at least intriguing, represents a beautiful white flower known to bloom in the spring season, starting with the month of April. This flower originates from the American continents, both the northern and the southern, but it’s only found in some places of lower altitudes. The Ghost Flower goes by the botanical name of Mohavea confertiflora and it belongs to the Scrophulariaceae family, also known as the figwort family.

The Ghost flower tends to grow in non-alpine regions with high temperatures and usually arid soils. The semi-desert conditions are the most appropriate for this flower to develop and this particular predictability for not very resourceful soils validates its quality as being amongst the most resisting flowers in the world. The paradox between the fabulous appearance of the Ghost Flower and the place of its birth is simply amazing, as they tend to appear from nowhere. Lacking leaves or even a normal root, the Ghost Flower shows itself only when the conditions are appropriate, up until then remaining in relative obscurity. 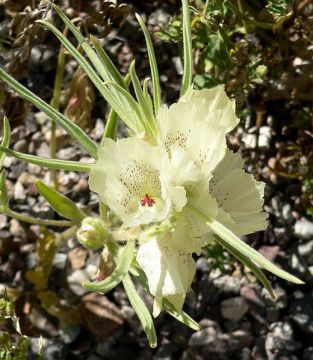 The flowers produced by the Ghost Flower are creamy-white colored and show their bloom in the spring. The flowering is comprised of a sole flower with few petals which blooms at the top of a steam measuring up to 30 meters in height. Regarded for many years as being parasitic flowers, the Ghost Flowers are now viewed as fertilizers factors, as botanical researchers have come to prove that these parasitic plants help the soil by creating extra fungi, increasing the resources of that particular soil.

The Ghost Flower bears many names amongst which we can mention the Indian Pipe or even the Corpse Plant, both of them implying a nature that could be viewed as opposite to the idea of flower. A flower is a term denoting purity, distinction and elegance, whereas the Ghost Flower seems to envision the exact opposite properties, like degradation and frightful appearance.

Even though most of the times it occurs on white, there have been cases when the Ghost Flower was found showing pink shades on its petals or even black flecks. Most of these exemplars were registered in deplorable regions, where the flowers were growing at the bottom of trees or bushes, with no independent space of their own, not as much sunlight and in low temperatures. Another variety of the Ghost Flower was registered to occur on a purple to red color, but scientists say that this case is extremely rare and don’t exclude the possibility of a floral mutation.

The Ghost Flower although it doesn’t produce any nectar, it does pollinates with the help of male and female bees. The pollination process is similar to that of the Mentzelia involucrata flower, originating from the Mojave Desert and the Sonoran Desert.