Lamium Purpureum, also known as Red Deadnettle or Purple Deadnettle is a flowering plant usually seen as a weed. As it frequently is a host of the leaf-roll virus that affects potatoes, in some areas it is considered to be, an invasive, dangerous weed.

Red Deadnettle is seen, not only as a weed, sometimes dangerous for crops, but also as a flowering garden plant. If planted in colonies, the result is a delighting flower carped that can have a refreshing influence over any garden. Red Deadnettle has small hairy leaves and purple little flowers that begin to bloom early in the spring. 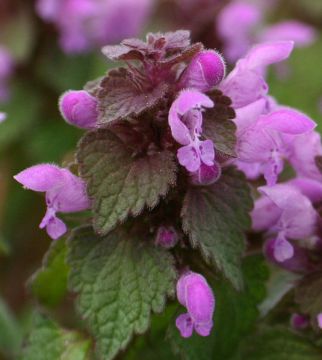 Even though the Red Deadnettle is neither a serious danger, nor a spectacularly beautiful plant, and it is mainly considered a weed, there are a few species belonging to the Lamium genus that are very popular among garden flowers. The reason is the low degree of sensitivity regarding factors such as shade for example and the growing period that is significantly lower than in the case of other garden plants. One of the species that offer all this benefits, along with a beautiful, cheerful aspect, is the Lamium maculatum.

Another quality of the Red Deadnettle is the flowering period. The plant starts blooming at the beginning of March and it fades at the end of October, offering a period of eight months of flowering, convenient for every garden.

Red Deadnettle can grow in almost any place. It can either grow on fields where it gets less attention, or in gardens and the only condition is a sandy-soil or one rich in nutrients.

The watering process shouldn’t be necessarily a very careful one, and from this point of view, the plant requires no special attention.

The plant has branched stems that can reach a height of 12 centimeters, the flowers are not singular and three or more can radiate from a single node and the fruits have the appearance of a small berry.