Silverbell, a specie belonging to the Styracaceae genus, is a small tree usually used as an ornamental one, because of the maximum height of 15 meters that the tree can reach.

Silverbell, also known as snowdrop-tree or opossum-wood, is useful as an ornamental plant but also as a source of benzoin resin. This substance, extracted from the tree’s bark is used, not only in medicine, but also in creating different perfumes.

Depending on the specie, Silverbell can reach a size of 39 meters, this height being specific to the mountain, as it is growing in the Appalachian Mountains. Even though this specie is called Carolina Silverbell, and is identical is aspect with it, except for the height, it used to be considered a different specie and was called Halesia monticola. Nowadays, after several studies, the tree is considered to be synonymous with the Carolina Silverbell. 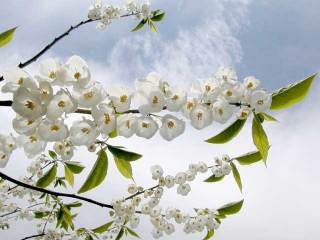 The tree has alternate leaves with no fragrance and flowers that are either solitary or grouped in inflorescences. They appear between March and May, after the expansion of the leaves and become bigger with the years. After a period of 20 or 25 years of life, the tree begins to produce bigger flowers, maybe as a sign of maturity.

When talking about seeds, even though each flower has a four-celled ovary, usually only one is capable to resist. If the seed reaches maturity, it becomes sensitive to varying temperature. In order to help the seed to get over the dormancy, you should offer it a warm environment, perfectly moist, with a temperature between 21 and 27 Celsius degrees. Silverbell can also be propagated by root, cuttings or by layering and isn’t really sensitive when it comes to damaging agents such as insect pests or disease.

Silverbell also produces fruits that are usually dry fruits and rarely fleshy ones. The tree is in most cases planted as an ornamental one because of the beautiful flowers and less for the importance of its fruit. The pleasant aspect makes it perfect for gardens and, besides this, it can be an important source of shade.