Strelitzia represents a genus combing five species of perennial plants, amongst which the tallest, Strelitiza nicolai, can reach up to 10 m height, while the other species only 2 or 3 m. Impressive in appearance, the Strelitzia has large leaves forming a crown of ever-green foliage which is accompanied by the beautiful blooming flowers. The leaves passess the shape of a banana and are quite numerous. 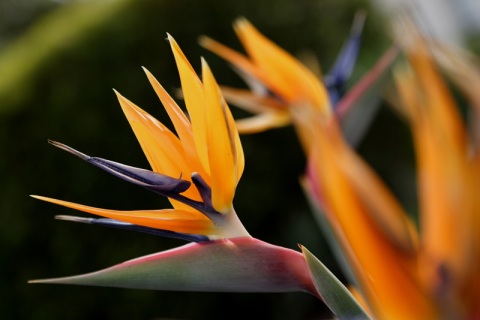 The Strelitzia is sunbirds pollinated, but if grown indoors there are some rules to follow in order to develop properly. Watering the plant can be a very dangerous process as this flower requires moderate watering, not too much, nor too little. Also, the Strelitzia flower must be kept between 15 and 17 degrees C at night, 17 to 20 in cloudy days and 22 to 25 degrees in sunny days. The watering has to be done between 2 to 5 times per month, according to the season. This flower has also a period of non-watering between the months May and August, time in which the plant is inactive.

Usually grown in gardens, Strelitzia flower is available at any time and it can be found on orange, blue, yellow or white. Although beautiful and elegant, this flower requires a certain amount of attention and care, as the Strelitzia is a flower very pretentious to light, water, soil and temperature variations. No matter the effort, the beauty of this flower compensates for every minute of nurturing.

The beauty of such flower couldn’t remain unnoticed as florists worldwide use it in their finest flower arrangements; painters use it as model for their exquisite nature settings and people use it to add beauty and life to their gardens and to their homes. The Strelitzia adds a touch of distinction to any garden and its beauty amazes even those who declare themselves to be against nature and vegetation.