The correct name of the plant is Zantedeschia, and the cases in which is spelled as cala lily are just errors made by inexperienced people. The plant was named after Giovanni Zantedeschi, a well-known botanist and was given by Kurt Srengel. 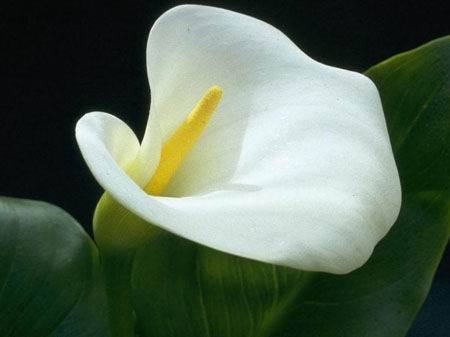 Zantedeschia is a very sensitive plant when it comes to water. Keeping it moist is very important in the process of growing Zantedeschias and besides the needed quantity of water Zantedeschia will also need plenty of light. Low temperatures will most definitely kill the plant, so a temperature of maximum 20 Celsius degrees is strongly recommended in order for the plant to maintain its health.

Zantedeschia embodies strength but also beauty because of its impressive dimensions comparing to other ornamental flowers. It has, not only large leaves and a big flower but also a delicate shape that along with the light colors inspire purity. This is one of the main reasons Zantedeschia had became so popular at weddings.

Zantedeschia does not have a culinary use as it contains oxalic acid and asparagines that are poisonous. The most dangerous parts of the plant are the roots and symptoms after consuming them are: burning in mouth and throat, swelling of mouth and tongue, pain and burning of the eyes, nausea or vomiting and diarrhea. Even though the best thing is to just keep it as a vase flower and try not to eat it, if this situation occurs, try to immediately contact a doctor.