Hamamelis virginiana is a large shrub usually growing in the United States and Canada that produces comestible fruits used either as dry fruits or as fresh ones.

The leaves, having dimensions between 3.7 and 16.7 are frequently used in medicinal purposes. Another use is in cosmetics as the extract of Hamamelis contains several bioactive ingredients useful for the human skin in the process of depigmentation. It is used as ingredient in face lotions, body lotions and hair products and as additive in several deodorants and antiperspirants. 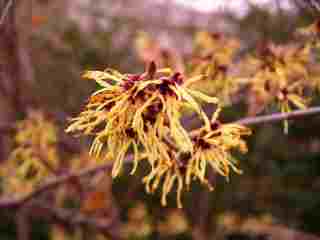 A study made in the United States shows that Hamamelis also has in its composition: tannin, kemferol, saponine and leucocianidol.

Because of its complex chemical composition the Hamamelis extract has astringent and haemostatic actions. At the same time, Hamamelis helps in the decongestion process and has great results in treating varix, haemorrhoids and phlebitis.

The oval leaves fall in late autumn when the flowers emerge. The yellow flowers appear in late September or at the beginning of October and the fruits have a dark black color and contain comestible white seeds. The flowers have a pale yellow color and rarely reach an orange or reddish color.

Native Americans used to use not only the leaves but also the bark in cases of external inflammations.

Hamamels Virginiana enjoys full sun or partial shade and has a light reddish brown wood color and a density of 0.68. It prefers moist acidic soil and the best propagation method is by seed as cutting are pretty difficult to start.