Symphyotrichum is a genus belonging to the family Asteraceae, gathering 90 species, very popular in Europe as garden plants. Even though Symphyotrichum in native to North America, the plant also grows in Central and South America. Regarding the species brought to Europe, two of the most popular used in decorating gardens are: New England Aster and New York Aster.

Symphyotrichum is a flowering, vascular plant that can be propagated by seeds or by dividing the root ball. In places like Indiana, Iowa, New Jersey, New York, Pennsylvania and Washington, the plant has been declared rare, threatened or even endangered. Even though it used to be very common in the United States, as it is its place of origin, nowadays, the plant has been declared an endangered species. 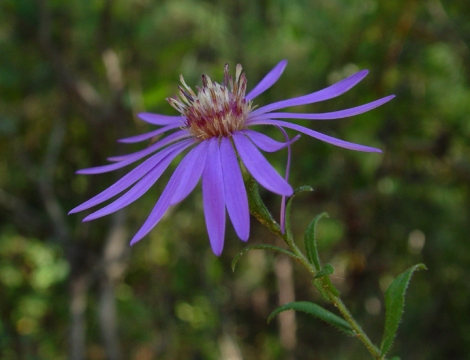 Symphyotrichum is a herbaceous plant, mostly erect and having alternate leaves. The leaves, even though having different shapes and dimensions, have one feature in common: there are in absolutely no case, divided. The flowers, shaped as a disc, have colors that can alternate, from purple or blue, to even lavender.

In the past Symphyotrichum had more uses than just a garden plant. Regarding the Native American Ethnobotany Database, Symphyotrichum was also used with two other purposes such as: “used as a smoke or steam in sweat bath” or in order “to cure a crazy person who has lost his mind”.

Regarding the growing environment, Symphyotrichum is anything but pretentious as it can maintain its health not only in full sun, but also having partial shade. The watering process must be done with certain regularity, paying attention at avoiding excesses.

Symphyotrichum begins blooming in late summer and early fall and because of its colorful aspect and delightful fragrance, it can turn into a natural magnet for bees, butterflies and birds.