Mostly occurring in regions specific to the Australian climate, the plant is not only confined to Australia as it can be found in Fiji, Malaysia, or even New Caledonia. Also known as the Blue Lace Flower, the Didiscus belongs to the Apiaceae family and bears the scientific name of Trachymene, a name with a very noble and particular meaning. The etymology of the name Trachymene belongs to the Greeks, and could be explained through the association of the word trachys, meaning rough, with the word meninx, meaning membrane. The fruit of Trachymene inspired the name of this beautiful flower, as botanist mostly use this name, while the majority of people refer to it as the Didiscus or the Blue Lace Flower.

The plant has its flowering at the top of a tall stem and its bloom is famous for resembling Queen Ann’s lace, which can justify one of the commonest used names of the Trachymene. They usually flower on shades from rose to blue and lavender.

Even though originating from Australia, a continent that can offer it abundant light and high temperatures, the Trachymene flower can also be cultivated inside, in all regions. The most important aspect when considering the cultivation process of the Trachymene is to respect the flower’s need for space and water, and to know that although it flowers starting with July or August, it usually has to be planted in early March. 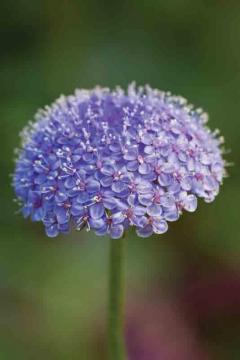 The Trachymene flower is mostly used in decorative arts, at designing floral arrangement or simply when you want to bring some joy to a house. It looks wonderfully in a vase and you would be surprised to find out that after the cutting of the stem, the flower can live up to 10 days. The storage temperature can vary between 35 to 38 degrees Fahrenheit.

The usually tall stem of the Didiscus is quite hairy and when planted indoors it may collect dust, giving it a very shabby look. No matter if you’re planning on planting it in a garden or in a closed venue, you always have to keep in mind the fact that the cultivation of the Didiscus requires a lot of space, space being primordial in the successful growth of the plant. Without the necessary space the flower can die out from its very first days or it may never reach it maturity. Another important aspect is the water used for nurturing it, as the Trachymene flower absorbs a great quantity of water but distributed exactly when needed. The soil doesn’t have to be fertilized with chemical substances, a well-drained soil will do.